As a small child, maybe aged three or four, I would always be asking my mum or dad to read to me, and more often or not it was Babar Loses His Crown that I requested. Without any open frustration, they would obligingly read this story to me again and again with what felt like the same level of commitment to the story every time. In animated voices they would play the worried Babar, the comforting Celeste, and I was always just as intrigued in this book as the last time we’d read it. 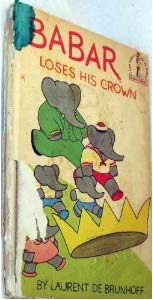 I couldn’t find my own copy of the book, but this one from Amazon.com looks nearly identical!

Though I had not forgotten Babar- my friends and I still argue about the correct way ‘Babar’ should be pronounced! – I was very surprised when the three-year-old boy I was babysitting a month ago ran and grabbed it from his big pile of books and bought it to me to read to him. His ‘new’ Babar was identical to mine; a scruff, second-hand copy with a worn front cover and a small rip down the spine. However, its oldness didn’t bother either of us. The pages still turned, the illustrations were only slightly faded, and the story, the magic, was definitely still intact.

Delighted at the task of reading this old favourite to a sweet little boy, I tried to mimic the same enthusiasm my own parents had shown when reading it to me when I was little. It worked to a point, as the boy seemed to enjoy the story, or more so the funny voices I was going to much effort to put on. He loved helping me turn the page as well, sometimes a little too early!

As the story progressed, and the wild pursuit of the mysterious moustache man with the wrong briefcase continued, even the boy’s older brother began to take an interest. At first he had made his disdain clear; no way was he going to read a story about a family of royal talking elephants! But he couldn’t help it. The mystic of this story prevailed, and he became engulfed in it too.

“I betcha Moustache Man is actually really evil and has a weapon in that suitcase! I bet!”

Upon hearing this violent accusation the younger boy turned to me, his eyes wide in fear, as if asking whether something would really happen to his beloved Babar. I looked at both boys carefully and chirped like I was living the dream and reading a childhood favourite on Playschool’s story-time: “Let’s see what happens, shall we!” The older boy agreed, the little one was comforted in my reassuring smile. 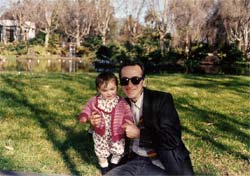 I love this photo of my Dad and myself. If it wasn’t for my loving parents being so nurturing, and reading to me as a young child, I would never have the passion for books and writing I have today.

Evidently, there was some disappointment when the kind truth was revealed, and Moustache Man’s true identity was that of a kindhearted clarinet player who had taken the wrong suitcase only by mistake. “Ohhh!” the older boy whined. But he was quick to console himself. “You know what, I think he was just lying and he actually IS evil!”

After a some reflection of the book’s telling twist, the cover was closed and bed-time was pronounced. But when I attempted to take ‘Babar’ and put it back onto the bookshelf I was met with a protest. The three year old wailed and tugged it back, his small eyes filling with tears, and I let it go. “He sleeps with them,” his big brother explained with less than a shrug. So I left Babar and the two other stories we’d read surrounding the little boy in his blue pyjamas. I pulled the doona over him and he snuggled down next to them, his beloved books to stay there with him right through the night.

I was thrilled, amazed, that this story could be enjoyed so much, 15 years later, with the same level of enjoyment from two little people, not unlike I once was. It is this that I love about stories; they are timeless. 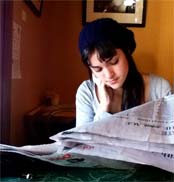 Maddie Bradley and Simone Pakavakis are both students at Melbourne Girls College, where I am a distance Ambassador for Reading. I asked their teacher, Sally Sutherland, if she would run a competition so I could come up with a student contribution for the debate. I offered a prize of books, reasoning that any student who thought books were worth winning was the kind of student who was likely to be interested in books, informed and articulate. Every entry I got was great, and in the end I had so much trouble choosing a winner that I decided there would have to be a runner up. I think you will enjoy reading what these two bright young women have to say, as much as I did, and I welcome them to the debate- the future is in their hands, of course. They ARE the future of reading.
Posted in The Great eBook Debate
Simone Pakavakis, The Great eBook Debate