It was like a small death – a lemming leaping over the precipice with the mob because someone thought it was a good idea.

Only to survive and wonder how you could be convinced such an act could be constructive in the short or long term.

At 21 I relinquished the loves of my young life, the booksof my childhood, for a worthy cause.

Not my worthy cause – the workplace of my future mother- in- law was a mental hospital in Melbourne’s north where she was matron.

She knew of my treasure trove, and in collusion with my mother presented a case to forsake my hoarding habits and have a good clean out of the book case. After all – I would be married in a year and travelling and my childhood stash would be an encumbrance to my parents.

But – should I have children of my own, wouldn’t this precious collection be the source of rousing imaginations of a new generation? 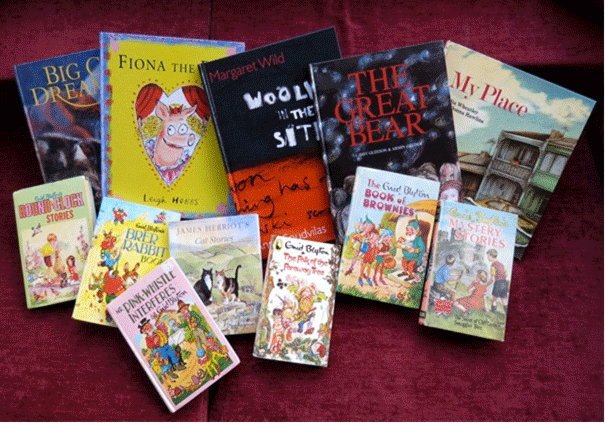 Some of the books from my grown up chlldren’s library.

I recall painfully sorting through my dearest companions. I still had Enid Blyton from Noddy to the Faraway Tree to the Famous Five and Secret Seven, a weighty old Blinky Bill with his stick and kerchief on a sepia cover I’d been given when I was very small, and May Gibbs’ Snugglepot and Cuddlepie which I adored.

I think these two important contributions to Australian children’s literature helped form a very early and healthy interest in the environment. I wonder if Gibbs knew just how menacing the banksia men were to the very young.

The grey- blue covers of Brothers Grimm and Hans Christian Anderson stories were the perfect foil for these collections: unembellished, the print small, and perhaps a single ink drawing to indicate the theme of the story, itself etched in a young girl’s consciousness and sometimes the stuff of nightmares. But always irresistible, loving to be horrified.

Mine was a rich collection of its time, from marauding, spiky banksia men to tales of brave young pre- pubescent girls leading their friends into dangerous adventures where their independence, innovation, courage and loyalty to one another were the keys to triumph and mystery solving .

The covers featured spirited, fresh young crusaders – and the books themselves were fittingly kept in pristine condition.

The Girls Own Annuals were a different mix of robust stories and vivid illustrations, but still the inspiring young girls reaching out, exhibiting a sense of freedom their glowing faces, pursuing strong moral codes with heroic enthusiasm.

These large, hardbound volumes were hard won. I had to run hard over 100 metres at my uncle’s company’s annual picnic races to win the coveted prize. So whether these were an annual subscription for a deserving young girl – or you won it by sheer leg-work, they were highly sought.

My copy of Gulliver’s Travels was also hard to part with. It was a gift from a favourite aunt which stimulated hours of my own interpretive drawings.

Growing up in the 1950s a young girl was privileged to receive the glossy volumes dedicated to the inspirational young Royal Princesses Elizabeth and Margaret – at home at the palace, at leisure, robed for pomp and ceremony and splendidly attired for horse-riding and dog walking in the wilds of Scotland. The splendour of Elizabeth’s coronation; carriages, gold ones at that, ignited a girls’ imaginings.

And that’s what the books of your childhood were all about – the magic of words and pictures.

Although the matron always kept in touch, I never did marry her son. And I always regretted donating my little library.

In the past 20 years I’ve set about rebuilding another young readers’ collection. Superbly written and illustrated picture books – many of them the creation of friends, and many favourites by Enid Blyton.

The e-reader has no application for children’s literature.

Few tasks are more satisfying than reading to children. Being read to as an adult is pure indulgence. I was introduced to The Lion, the Witch and the Wardrobe under my lover’s counterpane, and many other titles he felt compelled to share.

An e-reader doesn’t fit the picture.

The fifth annual Booktown in the former mining town of Clunes in central Victoria attracted more than 15,000 book lovers in May this year, most of them hungrily on the hunt for their special interest titles.

Clunes, the 15th site for an International Booktown , has a local population of less than 1,000. It invites second hand, antique and bargain booksellers from across Melbourne and regional Victoria with author panel discussions .

A handful of Melbourne expats have built this remarkable event into one of the most unique experiences for book lovers in Australia – and not an e-reader in sight.

One well known author said this was the experience of hunting, interacting with like-minded people, sharing the joy of finding that precious pre-owned book.

The tactile experience of clasping a book and page-turning is a similar one for those who refuse to abandon their newspaper. And you can’t smell the history on an e-reader. You wouldn’t take it to the beach, soak in a bath.

Like the ipod, the e-reader is convenient. An easy travel companion. A handy tool for an academic environment.

I wonder however I ever lived without my ipod. But I’ve never discarded the vinyl, and my collection of CD’s simply grows. Vinyl is the collectable for gen Y, and vinyl is again the preferred pressing for many of today’s musicians.

The book is the eternal gift, we will always bask in the warmth of our book collections. Our libraries will only increase in value as the important repository for valued works going out of print.

While authors and publishers may have taken a hit from the e-reader, the book will remain eternal. 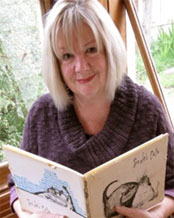 I have known Denise Civelli ever since I started as a cadet journalist at the Geelong Advertiser. She edited me, and I think that is why I place such high value on the relationship I have with an editor. She was meticulous, scrupulous and she had ethics that often put her at odds with some of her bosses. I loved her for her scruples. And having started with the best, I know better than most exactly what it means to be edited well.

Denise began her career at Melbourne’s Leader newspapers and the city’s first Sunday newspaper before travelling and working overseas for some years, primarily on magazines and newspapers in London and Toronto. When she returned to Australia she moved to Geelong, filling various roles at the Geelong Advertiser and expanding its readership base, particularly in background, investigative news and features.

She returned to a working life in Melbourne some years ago, sub-editing and freelancing for the Age and Herald Sun, and other media organisations.

I was very interested to see what angle she would take in this forum. As ever she surprised and delighted me.