The night before last, straddling midnight between yesterday and today (which is almost a metaphorical representation of what we are doing with the eVolution debate on this site), I finally managed to upload Greylands. This was my responsibility entirely, and I felt the weight of it because of all the work Min put into setting up this site and maintaining it. I didn’t want to let her down, let alone anyone who would come on to have a look at the book after Nadia’s wonderful launch speech went live.
Just in case, I had accepted the help offered by the wonderful Alex Adsett, who loaded it up onto Booki.sh, in case I failed. Also I had made some good preparation in advance by asking Bill King to help me get it part way onto Amazon – he could have done the whole thing but we didn’t want it available before the launch day, and the very next day he was headed for Scotland and I was headed home to Australia. 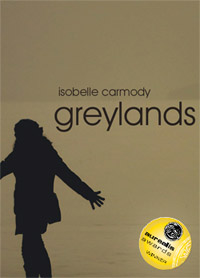 Cover for the eBook of Greylands

All this was in my mind as I drove helter-skelter down from the mountain, shedding passengers as I went, to finally land, very late, up on the doorstep of my savvy friend Carol, knowing that I would still need a guiding hand. She guided me through finalising the upload to Amazon and putting Greylands up on Smashwords. She had done it with her own book, The Zmora, also as an experiment, though I think she was quietly tearing her hair out in dealing with me. It took us till 4.30 in the morning because my desktop is a mess, and I do not properly name files or put them anywhere sensible. That meant a mad hunt for the ISBN, the cover page (for Smashwords) and then an even madder hunt for a complete final version of the book.

Just to backtrack a little, Ford Street had months ago given me the name of a guy who would be able to transform the text into .mobi and ePub forms, so I had those. I had sent Alex the ePub form wanted by Booki.sh and Amazon wanted the .mobi file, but it transpired that Smashwords wanted a word doc, from which it would then grind out all of the forms for its upload. That was remarkably fast once I had managed to pull all the pieces together, and I was really impressed that I could have uploaded the book at this site without converting the it at all! It did mean that I was unable to check the file as I had done with the .mobi and ePub forms, before sending a list of corrections to the conversion guy (in India!). No doubt there was a way to check it, but at 4.30 in the morning I was too stupefied to figure it out. In any case, the version I found had been checked thoroughly for reasons that will be revealed on this bulletin page next week!

The actual process of uploading, once you have the ePub or .mobi files, the cover and the blurb and ISBN (the Smashwords site actually offered to generate a free ISBN for us, which impressed me, too), it is a swift process. Though at the last minute Carol’s partner, a Vogel shortlist author, passing through the room on his way to bed, reminded us to include the ‘legals’ – that is the copyright notice and all of the stuff that in a book, appears in very small print a few pages in.

In the end, I did not manage the get my book up as an eBook alone – but I did feel I had lived up to my challenge to myself to put an eBook up in that I was part of every step and physically hitting the keys, even if Carol was pointing them out to me in the final exhausted moments of my journey!

I do feel proud but despite what all of my savvy friends said, I did still find it hard to do and a huge drain of time to go through all the steps and to do it at the standard I would want. In conclusion, I would not do it again myself. I would rather spend my time writing. But IF I wanted to I could. And it would be easier the next time and easier again the time after that. And so, it does give me the option to publish if and when I have something I love out of print or rejected.

This is not my final word on the subject. The reason we decided to launch the book midway through the launch month rather than at the end, if because I want to look at how it sells and what happens now, so I can include a bit of the happy ever after (or not) in the final roundup.

So stay with us for the rest of the month. We have some fabulous guests to come and another couple of exciting and unexpected developments from this site and the e-publishing of Greylands, which we will announce with due ceremony in the days to come, and of course at the end, we will also announce the three winners of the three multi-book packages and a runner up award.