The Journey Ends…Or Does It?

Tomorrow, this Greylands Launch site in all its depth and complexity, will self-destruct. I know it is wonderful – so much more than I imagined when Min and I devised it in theory- and I am touched how many emails and posts asked that it be left up, but in general, beautiful things do not last forever- indeed it may be part of their beauty that they are destined to fall. 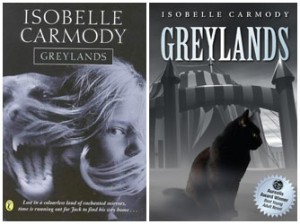 What I would like to announce today, the penultimate announcement, is that one of the amazing things that has happened during the creation and the month and a bit during which the site had been live, is how much interest my eBook experiment stirred up in a very practical way, around my out of print books.

Greylands is now on the verge of being optioned as a movie and being remade as an audio book. And as a direct result of this site, the book also to be released again, re-edited with an accompanying essay, in traditional print form as a paperback from Ford Street Publishers. Indeed the book will be officially launched in its newest incarnation by Maureen McCarthy at the Victorian RACV club on October 1, as part of the aptly named Keeping Books Alive Conference (rob@childrenscharity.com.au for further details).

The conference is open only to delegates, but we will have a public event afterwards to celebrate, details to be announced on the Ford Street website.

I can tell you my delight upon receiving my advance copy of this incarnation of the book was no less keen than when the book was first published by Penguin, and I got that in the mail! The cover is lovely!

And it is not just Greylands. 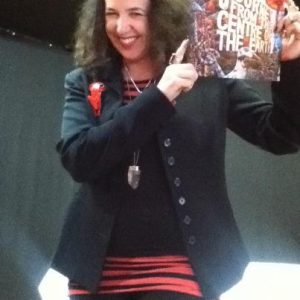 When Peter Mounsey, to whom you have been introduced on this site, suggested the possibility of enhancing an existing out of print picture book, I was interested. It seemed a very logical extension of my eBook experiment. I wrote to the publishers to formally require a reversion of rights to both Journey from the Centre of the Earth and Dreamwalker, both of which seemed as if they might be enhanced to good effect. I had also spoken to Marc Mc Bride, who illustrated Journey, and was as delighted as I was when Hachette asked if they could republish the book, and in fact, I have already received my advance copies. I had agreed on our behalf, that Hachette could reprint and create an eBook, but we retained the right to create an enhanced version. This is currently in process and down the track, I will certainly write and talk about our journey to turn the book into an enhanced eBook.

As for Dreamwalker, which is a picture book I had created in tandem with the late and wonderfully talented Steven Woolman, after the rights had reverted, a conversation with Helen Chamberlin led to Windy Hollow offering to reproduce the book in print form, reformatted as a graphic novel.

This was an exciting idea because I am working on a graphic novel, which Windy Hollow will publish. And while I have loved Dreamwalker, there were things both Steve and I had thought we might have done differently. Thus began the long route to tracking down artwork, which involved numerous emails, some to the Lu Rees Archive, where, as it turned out, the majority of the art resided, having been donated. It was agreed that Windy Hollow would produce a print version of the novel, re edited and reformatted as a graphic novel, and that they would be able to produce an eBook of this novel, but once again, I retained the right to create an enhanced form of the book with Peter. 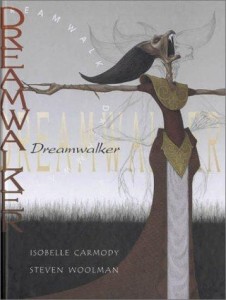 The fact that Steve had died was tragic for he was a bright, gentle, wonderfully talented and quiet young man, and of course it meant we were unable to consult. But Steve’s agent came to me after I had spoken at the CBC conference in Adelaide earlier this year, to explain she was retiring and that Steve’s parents had decided to assign me the right to deal with his artwork in these new projects, so this considerably simplified matters. I was deeply touched, too, for I knew Steve had been very close to his parents and I look forward to one day giving them several new versions of their son’s artwork.

These enhanced books will be available down the track, to be bought, if all goes well. I promise to keep you posted!

To find the answer to this question, check out the final announcement on the site tomorrow…