Comments Off on Greylands Review – Magpies Vol 12 No 5 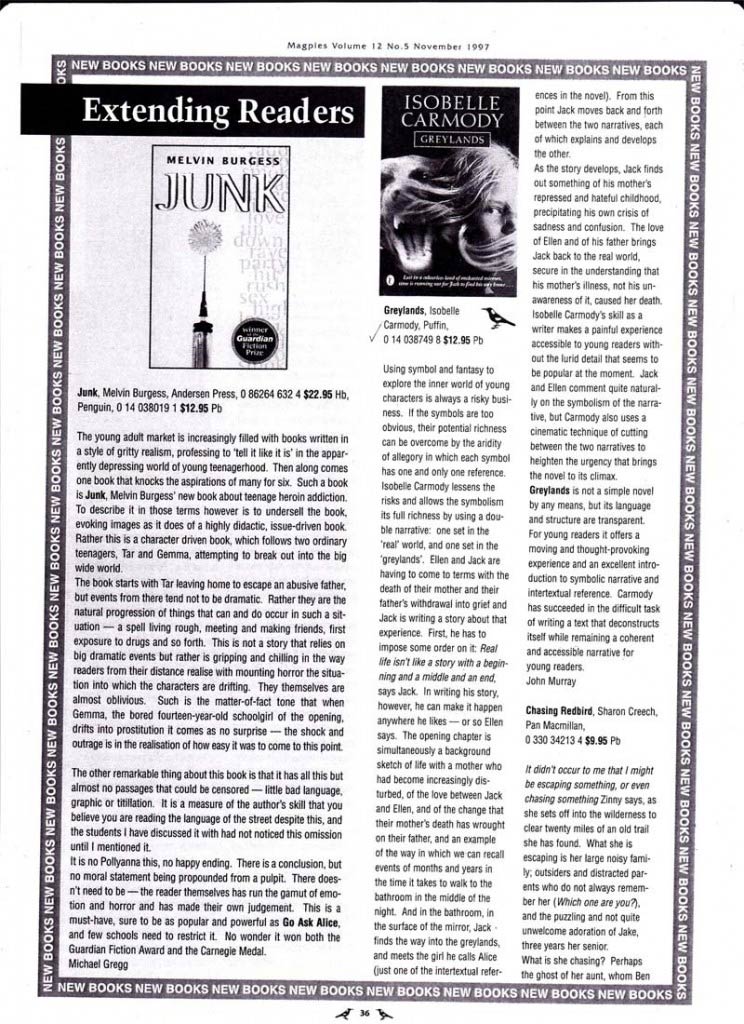 Using symbol and fantasy to explore the inner world of young characters is always a risky business. lf the symbols are too obvious, their potential richness can be overcome by the aridity of allegory in which each symbol has one and only one reference. lsobelle Carmody lessens the risks and allows the symbolism its full richness by using a double narrative: one set in the ‘real’ world, and one set in the ‘greylands’.

Ellen and Jack are having to come to terms with the death of their mother and their father’s withdrawal into grief and Jack is writing a story about that experience. First, he has to impose some order on it: Real life isn’t like a story with a beginning and a middle and an end, says Jack. In writing his story, however, he can make it happen anywhere he likes or – so Ellen says.

The opening chapter is simultaneously a background sketch of life with a mother who had become increasingly disturbed, of the love between Jack and Ellen, and of the change that their mother’s death has wrought on their father, and an example of the way in which we can recall events of months and years in the time it takes to walk to the bathroom in the middle of the night.

And in the bathroom, in the surface of the minor, Jack finds the way into the greylands, and meets the girl he calls Alice (just one of the intertextual references in the novel). From this point Jack moves back and forth between the two narratives, each of which explains and develops the other.

As the story develops, Jack finds out something of his mother’s repressed and hateful childhood, precipitating his own crisis of sadness and confusion. The love of Ellen and of his father Jack back to the real world, secure in the understanding that his mother’s illness, not his unawareness of it, caused her death.

lsobelle Carmody’s skill as a writer makes a painful experience accessible to young readers without the lurid detail that seems to be popular at the moment. Jack and Ellen comment quite naturally on the symbolism of the narrative, but Carmody also uses a cinematic technique of cutting between the two narratives to heighten the urgency that brings the novel to its climax.

Greylands is not a simple novel by any means, but its language and structure are transparent. For young readers it offers a moving and thought-provoking experience and an excellent introduction to symbolic nanative and intertextual reference. Carmody has succeeded in the difficult task of writing a text that deconstructs itself while remaining a coherent and accessible narrative for young readers.