A View of One’s Own

I am not tremendously for or against ebooks – they simply are but one more form that stories can take. Unlike newspapers, I think there will always be a market for printed books, and that print will remain the preferred form for illustrated books in particular. 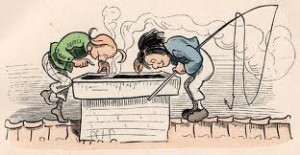 At A&U they have been part of our lives for several years now. Our ebook queen Elizabeth Weiss, also our Academic publisher, felt the impact of plunging text book sales and the rise of ebooks much earlier than the rest of us and made it her business to change our systems so that we could take advantage of the digital revolution as it developed. And she was right – the sales trajectory across the whole A&U list is zooming up. Ebooks are here whether we like them or not and as publishers we have to engage or die.

But I want to segue here and not give you the publishers’ perspective – there is so much written on this topic and to be honest I am more interested in what makes a literary culture vibrant than what Richard Flanagan described in the Age on June 16 as the ‘determined, dreary excitement around digitisation’. I am not a luddite, nor a technological whiz – I am simply someone who uses a computer, has borrowed the office Kobo ereader, owns an iphone and may have an ipad by the end of this year. I also live in a house stuffed full of books and art.

I compulsively devour stories in many forms. Pictures excite me as much as words and I love the visual storytelling found in picture books, graphic novels, experimental hybrids. I also love movies, old and new, and tv serials – my most recent obsessions including the Danish series The Killing and Vince Gilligan’s Breaking Bad. For someone as squeamish as me about violence, the only reason I can tolerate the blood and guts in these shows is because of the brilliantly written characters and how they behave under pressure. I relate to them, and I understand them, even as they are put into situations beyond my personal experience. 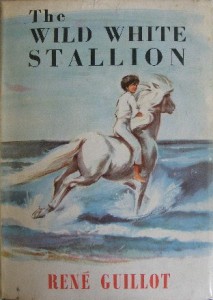 For me, it always has and always will be all about story – my whole working life has been in the service of bringing books and young people together. And I believe that no matter where or when we are born, there is magic of some sort at work and that we will get the stories we need at the time we need them in whatever forms are available to our particular generation.

My parents had a number of very old audio reels of German children’s stories – not just the Brothers Grimm – though they were favourites – but a range of stories about humans and animals. I was the youngest of five and would listen to these stories with rapt attention, while drawing horses, or making something eccentric out of wool or felt. Those stories captured my imagination. Later I listened to Disney’s ‘long-playing records’ which used the phrase ‘turn the page when Tinkerbell rings her little bell like this’ – a sure-fire way to entertain me for hours. Using the record-player was a big thing in itself – I had a powerful fear of damaging the needle … Of course I also read for myself, but the experience of hearing words read aloud made me aware from an early age of the rhythms and drama and power of the spoken word.

Being read to – in German and English – was also a huge part of my childhood. I’m sure our mother did read to us, but I don’t have as clear a memory of her doing that as I do of my father reading stories of loyal horses and dogs usually coming to some sad but noble end. We would lie on our beds, tears running down our cheeks, Dad included. This must have served some cathartic emotional function, for my outer life was relatively normal and happy. My older sister also read to us two little ones – her most impressive feat reading the entire Hobbit and Lord of the Rings to us when I was 7, as well as the entire Silver Brumby series.

Fast-forwarding to when I became a parent, reading aloud to my two children was as essential as keeping them fed and clothed. Any troubles and tensions from the day dissipated when we snuggled up and shared hundreds of picture books and novels. Peter Pan fascinated my 5-year-old son so much that we read the unabridged version at least 3 times that year. We discovered treasures together, like Tove Janssen’s beautiful, complex world of the Moomintroll series, Robert O’Brien’s The Rats of Nimh and Beverly Cleary’s Ramona series. 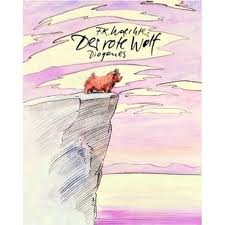 Der Rote Wolf - an incredible German book Isobelle will remember because it brought us both to tears in recent years ...

My son and daughter shared a bedroom until they were 8 and 10, so there was never any gender discrimination. We just read everything together. Both children are well and truly adults now, but they both say they have no memory of learning to read – it was just a given, as natural as breathing.

Fast-forwarding to being a grandparent to a 2-year-old boy and a soon-to-be-born girl as well as a step-grandma to two gorgeous boys in Perth, many kilometres away, books remain at the emotional heart of our bonding.

For this ‘i’ generation, devices with cameras, games and animations one small finger touch away, are as commonplace as milk and bread. My 2-year-old grandson is mesmerised by our i-phones and can already navigate his way around the icons, locating apps that amuse him and pictures that make him laugh. We share picture books and draw and play as we’ve always done, but through his eyes, I can see that the wonder of technology is not to be feared – it is simply another way to get to stories.

My hope is that books in all forms will continue to connect us to each other. Imagination and empathy are needed in this world more than ever, and books are one of the best ways to feed our curiosity, develop our minds and help us to be compassionate and courageous and the best we can be. 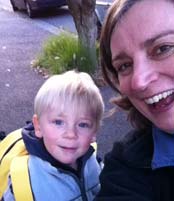 Erica with her beloved grandson Marlo

Erica Wagner is a publisher of books for children and teenagers at Allen & Unwin. Before, she worked at Penguin books as an editor, and one of her first editing jobs was to work jointly on The Farseekers, with my then editor, Kay Ronai. Kay was brilliant but Erica and I just had a special relationship right from the start. Erica edited almost all of my books from then on until she left Penguin. Among those was The Gathering, which won me Book of the Year. It killed me when Erica left, but she had promised to find a replacement that would measure up and she put me together with Nan McNab. The closeness and longevity of my working relationship with Nan shows how well Erica knew me and what I needed. But still I missed her and I have maintained a strong friendship with Erica. Last year she published The Wicked Wood and The Wilful Eye, containing stories Nan and I had collected and this year, Allen & Unwin published Metro Winds, my first collection since Green Monkey Dreams was published. ( A&U also produced a lovely reprint of Green Monkey Dreams as a companion book, with an exquisite new cover by Zoe Sadokierski, who did the Metro Windscover).I signed the contract for Metro Winds more than ten years ago. Aside from all of her other virtues, Erica has patience.

This is all by way of telling you that Erica played a profoundly important role in my life as a writer, as well being someone I love as a friend and admire as an artist. You can see her work and at work wearing her artist hat here: www.ericawagner.com.au. Have a look at the vimeo of her Dark Horse show and as well as admiring the work, look how many illustrators are there, vowing undying love! Terry Denton is hilarious.

There is simply no one else like her and when I asked her for a piece for the book form debate, I knew she would produce something thoughtful and heartfelt. Erica Wagner never does ANYTHING by halves.