Recently my boyfriend and I broke up. When the recriminations and the laments were done, my parting request was that he return my copy of Joan Didion’s Slouching Towards Bethlehem. He’d borrowed it months earlier, promising to return it swiftly but instead inching through each essay with painful protraction. In the weeks that we’d been falling apart, I had hinted how much I wanted it back, but he kept insisting that he only had one chapter to go; ‘Goodbye to All That’, the final, my favourite, and as lonely as I felt I couldn’t refuse him that. But when he left I demanded the book like a madwoman, as if him keeping it any longer was an intimacy I couldn’t bear. 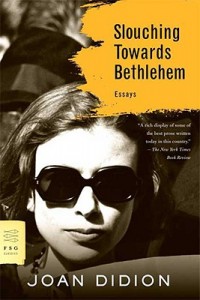 That morning I sat on my front stoop under grey skies, sobbing and chain-smoking and reading ‘Goodbye to All That’ over and over. In the throws of that narcissistic grief which wells in a broken heart, Didion’s wistful account of losing it in her late 20s was the only thing that seemed to make sense. But as much as I was seeking comfort in that familiar narrative — what Didion calls “the stories we tell ourselves in order to live” — I also needed the battered book that contained it; its creased pages, its peeling cover, its manically underlined sentences. It felt just as important to retrieve the object itself, as much as the beloved words inside, as some sentimental icon of what I would no longer allow that boy to hold.

What I wanted to read over and over again was the part where Didion describes “the boy I already knew I would never marry in the spring.” But what leapt out instead were her regrets, which at some point I’d highlighted with similar vehemence: “I was discovering that not all of the promises would be kept, that some things are in fact irrevocable and that it had counted after all, every evasion and every procrastination, every mistake, every word, all of it.”

When we take part in literary debates surrounding paper versus digital, traditionalists tend to fall back on nostalgic reasons for their allegiance to physical books. So often we fetishize the object itself — the weight of a book in our hands, the smell of its musty pages (a recent scientific study by a team of chemists from University College London and the University of Ljubljana found that this is in fact the smell of death) — when we know that what matters most is the stories between the covers.

But for those of us who have grown up with print, and amassed sizeable paper armies over the course of our lives, these objects are imbued with emotional resonances. The narratives that have affected us most deeply we associate with certain times in our lives, the book holding some trace of a past that now lies beyond our reach. What I cling to is not the object but the parts of myself, of my history, that it represents.

Writer and critic Luc Sante discusses his lifelong relationship with books in his essay, ‘The Book Collection That Devoured My Life’. While he claims not to be a bibliophile, Sante has amassed a stockpile that seems obsessive by most standards. Recently he built continuous 25-foot-long bookshelves in his basement office, organised chronologically, which run from one end of the room to the other. This isn’t a ruffle of his intellectual peacock feathers (“It’s rather a closed circle; I impress myself”), but instead a way of helping him write: “Books function as a kind of external hard drive for my mind — my brain isn’t big enough to do all the things it wants or needs to do without help. Optically scanning the shelves wakes up dormant nodes in my memory.” While Sante talks about this in an academic sense, this happens for me on a more personal register.

When I scan my bookshelves, it stirs up the memories around the stories; where I bought them, when I first read them, what they meant to me at that time. Those Henry Miller spines, all lined up in a dark row, that I read to impress a boy at university who proclaimed Miller was his favourite author — a statement that would now send me sprinting, but at 18 bestowed me with a few years of needless hurts. I flick past Charles Bukowski and I’m with my best friend from my early 20s on an achingly hot summer night, where we tried to sleep outside to get some relief but instead got drunk on cheap whisky and read each other misanthropic poems that affirmed our resent of the world. (That was a dependant and ultimately destructive relationship that imploded just in time.)

My inherited hardcover edition of John Fowles’ The Magus, it’s decaying spine held on by a few threads, holds inherited memories of my mother in her own early 20s. She’s sitting in the sun on Corfu, engrossed in the novel’s labyrinthine betrayals, which she would only ever say made her feel “so strange”; and then there’s me at 15, in an itchy armchair in my bedroom, reading that same dog-eared copy and trying to understand why. I could go on forever. When you think of books in this way, a collection becomes a cemetery — wall after wall of shrines to ghosts.

For us gravediggers, collecting books can become a sickness. Sante tells of the painful process of culling his library, discovering exactly how many books that he owned in languages he couldn’t read and how many copies of André Breton’s Nadja he’d carted around for years (five, each a different edition). In Ivor Indyk’s excellent essay ‘The Book and Its Time’, he describes the collector Jacques Bonnet whose library runs some 40,000 volumes: “It is the repository of his emotional life and the expansion of his memory; it protects him, and gives him an extraordinary sense of power.” But this also hints at the collector’s propensity for obsession, investing these objects with talismanic potential: “Books are particularly suited to express the pathology of hoarding because each contains a world, the idea of which may be cherished without ever being realised.” For us gravediggers, parting with our collections signifies a kind of death.

The benefits of e-books are indisputable — anyone who attempts to do so is clinging on to an even more elusive past. (Jonathan Franzen’s fear of e-books’ impermanence is surely the novelist’s fear of death, terrified that in a world without print he will not be granted immortality through his words.) And the list of these benefits is long: they are better for the environment, reduce costs for publishers and readers, make out-of-print titles accessible, allow publishers to release stories of lengths that were previously prohibited by print’s demands, and allow us to purchase books instantaneously. I’m about to buy an e-reader myself. But the taphophile in me would be devastated if I ever lost these paper traces, these shrines to my past, that I can kneel before whenever I feel the need.

One day I will pull down my copy of Slouching Towards Bethlehem and I’ll be on that stoop in winter, remembering the boy I already knew that I would never marry in the spring. 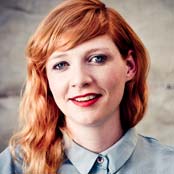 I have known Rebecca Harkins-Cross since she was a teenager, babysitting my daughter. She is the daughter of two of my best friends, a photographer and an artist. Even then, the school essays she occasionally showed me were bright, and she impressed me as a devout and intense perfectionist. She finished high school with such high results that she became a local hero for a while, receiving the Australian Students Prize, and received an Access Scholarship to study Arts (Media and Communications) at the University of Melbourne. She won the Dean’s Award for Academic Excellence in each year of her undergraduate studies, and later the Percival Serle Prize for her English honours thesis. These days she is a freelance arts writer, whose work has appeared in Meanjin, The Big Issue, Crikey and The Lifted Brow, amongst other publications. This year she won the Ivan Hutchinson Award for Writing on Australian Film from the Australian Film Critics’ Association, and received an Artstart grant from the Australia Council. She’s also the Project Coordinator of The Under Age.

Even I, who have known her for so long, and knew she would produce something good for the eVolution forum, was breathtaken by her essay. It is as searingly honest, as intensely intelligent and as beautiful as she is.

My personal favourite of the series.