a feeling for snow

I have come to think of December as the Dark Month 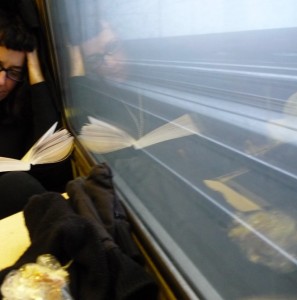 not just because of the difference between a Winter December and a Summer December, but because it is really incredibly dark. Day seems to last about fifteen minutes, and mostly that is overcast day. You get up in the dark and go for an afternoon coffee in the dark. But this is only an observation. Not a complaint.. 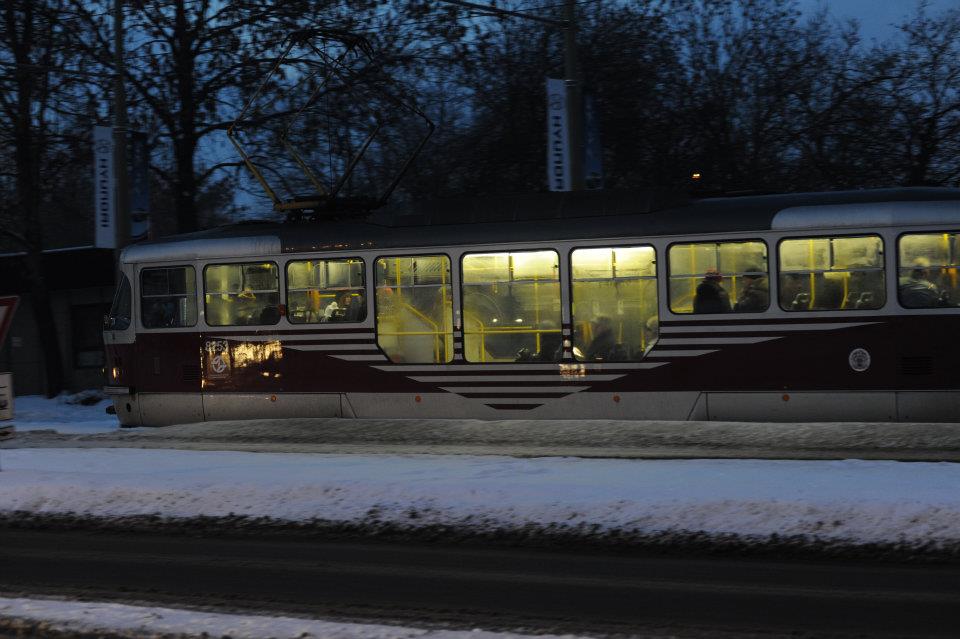 
because I have been in love with winter forever. 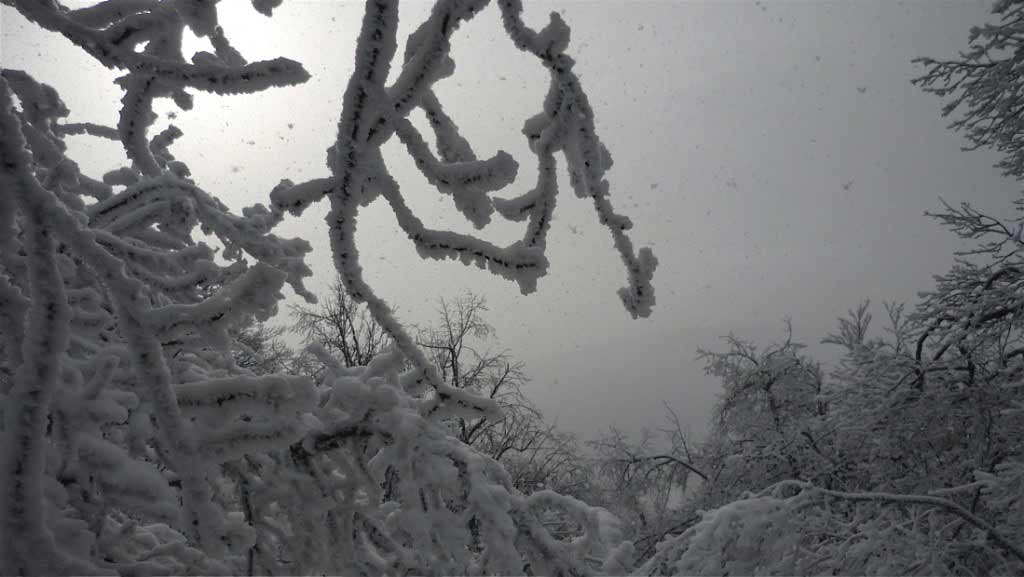 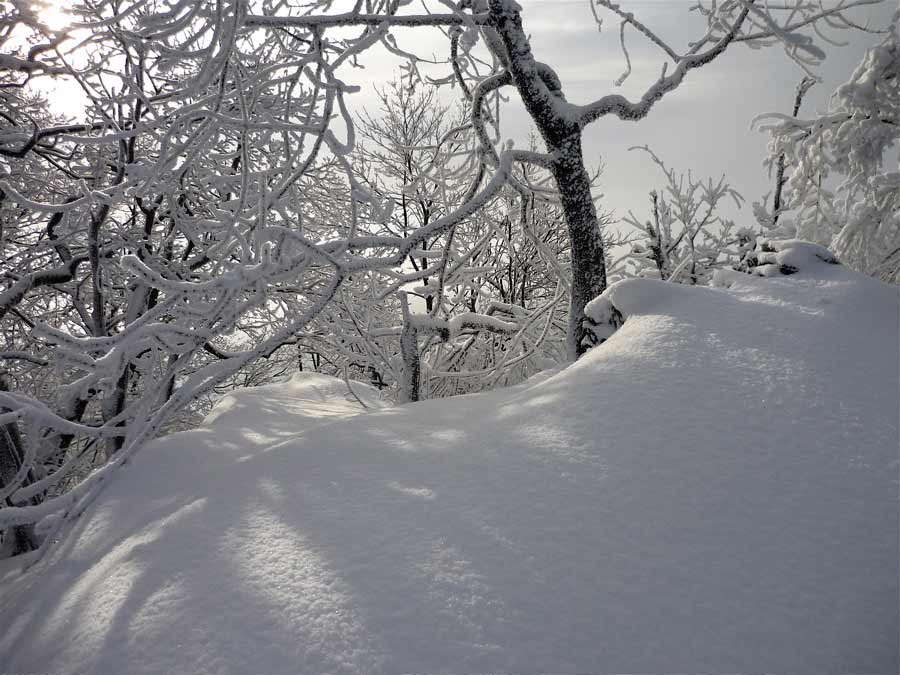 it is not that there is no light, but that light in this dark month is always subtle, diffuse, exquisitely elusive. The land, covered in snow, is often brighter than the sky. This is not a light that illuminates or demands. This is a hesitant, tentative light that allows infinite delicate reflection. 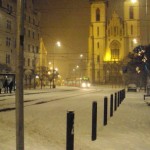 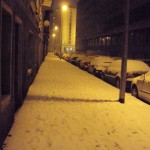 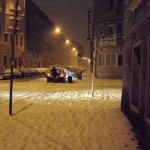 i love when snow falls thickly enough to blanket the world, turning the forest black and white and grey; the way the city turns sepia coloured, and the way snow swallows sound. I am enchanted by that particular silence that comes when it snows, as if the world is holding its breath. It feels to me as if the world has turned into a metaphor. Everything feels significant.

I remember once, in Prague, when it was 9 degrees below zero.  I have been here when it has been a lot lower, but that was my first experience of serious below zero cold.  I remember that I was coming home from the movies.  I live a five minute tram ride from the Stavovske Theatre where Mozart first staged The Magic Flute, and behind which, in Winter, an open air ice skating rink appears. To go to the movies, I cross over the black snake of the Vltava river which gives me a long and incredible view of the Castle on the hill, and then I walk past the glittering and ornate gilt and gold facade of the Municipal House. That trip is always breathtaking, but that night, walking through the streets after the late show, the cold was astonishing.  Oddly I was not cold, being well rugged up in a good serious winter coat, but the cold was palpable. Standing waiting for the tram, I felt strangely thrilled to be out on such a night. It felt momentous and it seemed to me that the few people about me were talking in hushed voices or moving very carefully over the frosty cobbles, as if the world was turned to spun glass or thinnest ice, and a single loud sound would shatter it all. 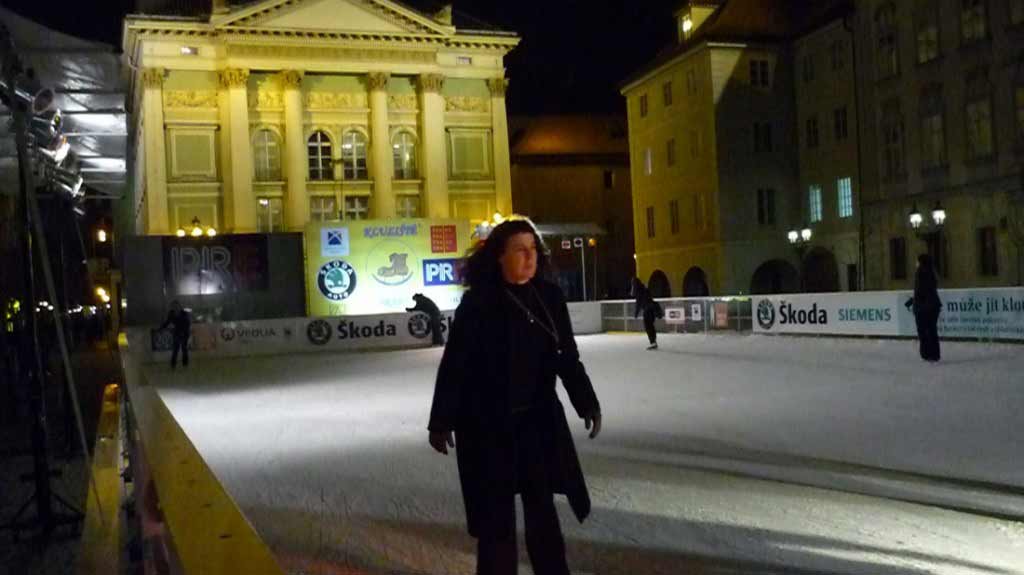 
it is no surprise, then, to read a review of Metro Winds by someone who notes this particular love I have for winterlands.  Certainly I was conscious of it when I wrote it.  Interestingly, the story that was intended to complete what I had eight years ago intended as a quartet about the archetypal (st)ages of life for women, set in each of the four seasons – child-Spring, Princess-Summer, Queen-Autumn and Crone-Winter was set in Prague. It was to be the last but I could not finish it, even though I waited years. That story is still incomplete, not because I have lost interest or got distracted, but because there is something required by it that is yet to be found- in me or in the world.  Or maybe it is the mood I will need to be in to finish that story… I only know that something is missing. 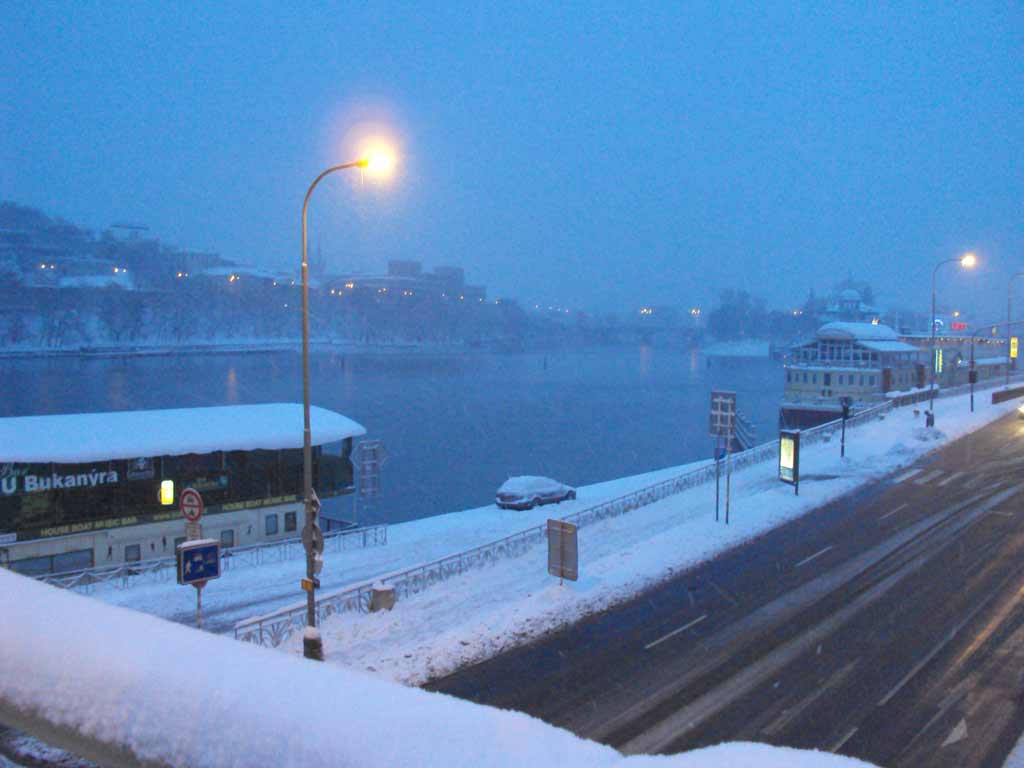 
some people would call that writers block.  But I don’t believe in writers block. Here’s a little of what I wrote for someone who asked me to write what I felt about it a few days ago, so that she could draw something to accompany it:

… I think of writing as a kind of bread-making, which is to say it is a slow business with a lot of waiting to see if the dough will rise, and then some hard work punching down and kneading, then more waiting, all with the possibility that the yeast will not rise … That is a long winded way of saying there are gaps in any act of creation where it seems like nothing is happening but of course it is. Indeed what is not seen is almost certainly the most important part of the process. And by that, I don’t just mean the part where the hard work is … invisible to onlookers … [but that] part of creation that happens beneath the eye-line of the creator, in the subconscious.


The mind has its moods and its ebb and flow. A lot is happening, always, but sometimes stuff has to happen way down deep, before it pushes its way to the surface…

does that sound like rationalisation? I only know I have never felt anything I started out to write was something I could not finish or wanted to give up on.  If I get to the point of writing something down, I have committed to it at a pretty deep level, and because I have always had this feeling- based on absolutely nothing but self doubt – that I am the sort of person who has a weak sense of purpose that needs stern shoring up, I could not allow myself to simply set something aside. So I never start anything without being sure I want to finish it, no matter now long that will take. I remember a clairvoyant once told me ‘You will do your task faithfully, even if it is irksome to you.’ I love that word – irksome. 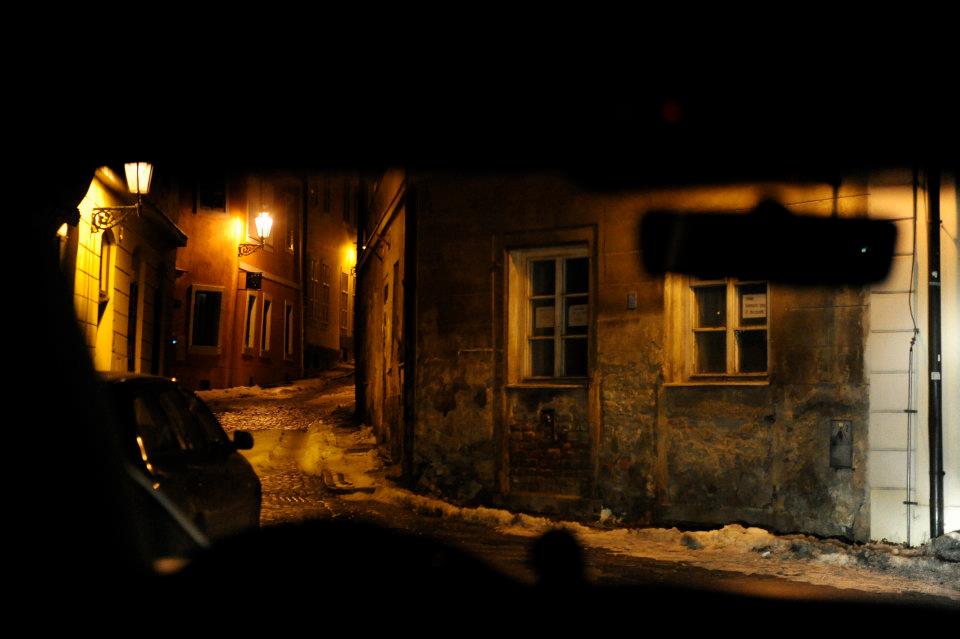 i do get irked (and depressed) when I am savaged for failing to deliver somehow as a writer, because I have not finished work as fast as someone feels I ought to have done.  Mostly I feel disheartened because it is simply not possible for me to know how long it is going to take to finish a story. Even agreeing to write one is a risk.  I agree to write stories every year, warning editors and collectors who ask that I cannot write to order and that maybe nothing will come, or something will, but I won’t manage to get it completed by their deadline. Because completing something is not my first desire. Getting it right is. Or as right as I can get it, because nothing is perfect. In this last couple of months I have had to tell two editors I like very much, that I am not going to manage to deliver. So often writing feels precarious and elusive and fragile and mysterious. That is why you get superstitious about the pens you use, or what you need around you, or what you do just before you start each day. You get fussy about atmosphere because all of these are things you can control. It is as if you are trying to pen the story in with practicalities – no pun intended …

no doubt it sounds self indulgent to say that I have timed the final artwork for The Cloud Road, where there is a lot of wintery stuff, for December/January. But it delights me to be doing drawings of snow when there is snow for me to walk in when I take a break.  Perhaps it is a self indulgence- after all I did the roughs at the end of Summer on Santorini Island, but isn’t that one of the great joys of being a writer?  Being able to indulge myself in such matters? Mind you that is drawing, of course, and a whole other thing from writing. 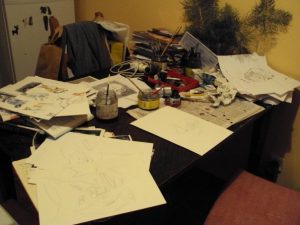 writing is often bloody hard work, frankly, because each thing you write is a new journey. You can’t use any of the maps or directions or trappings you used for the last journey, because this is not that. Each piece will have its own unique difficulties.  Then there are the difficulties that happen with every project. Sleepiness, for instance.

it sounds so innocuous, but today I spent half the day trying to stay awake. I was wide awake when I washed the dishes and hung the washing and swept the floor, and wide awake when I went for a walk through the icy streets, cringing a little from the icy wind, or when I later drank coffee and chose photos for my face book.  Ditto when I made dinner. But in between all of those things, whenever I sat down to work on my book, I felt instantly almost comatose. I could hardly keep my eyes open.  I felt desperate and depressed because it is not really as if I didn’t get enough sleep the night before, and my last flight was ten days ago- I can’t still be suffering jet lag! In desperation Googled how to stay awake when you are falling asleep( ignoring the memory of my 14 year old daughter telling me disdainfully that just because I can Google it, doesn’t mean the answer I get will be true or right). The main suggestions were Coke, Coke and a Mars bar, (John Marsden once told me that, and the nurses on the maternity ward- that surreal but companionable place, swore by it) black coffee (I drank two cups of white coffee), a walk (which I tried) and a nap.  I had the nap only because the Google result also said I would live longer if I took a couple of naps a week.) I even did a quiz on chakra because one of the Google responses said maybe some important  chakra were closed. Turns out my root and head chakra are closed. Since these are supposed to be the chakra at the top of my head and the bottom of my spine,  I had an immediate vision of  energy whirling dementedly round inside me because there was no way out. But that didn’t sound like it would lead to sleepiness. Then I read that a closed root chakra means you are in the wrong career. So I gave up  gritted my teeth and strove against this wall of deadly, deadening weariness, to gain a few more pages what felt today like an Everest of a book. 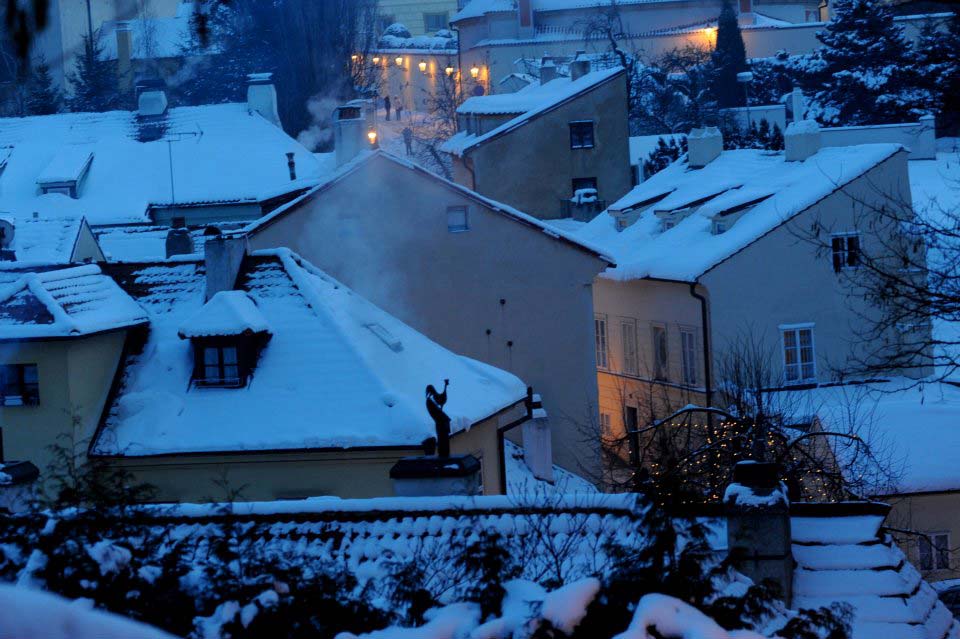 
oddly, tonight coming home late, it was suddenly very cold and the streets were misty.  I felt an immediate sense of mystery and elation that made me want to write. How perverse, I thought. How typical. 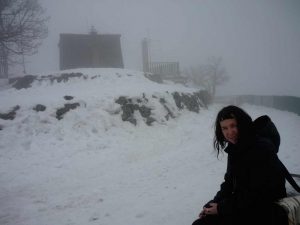